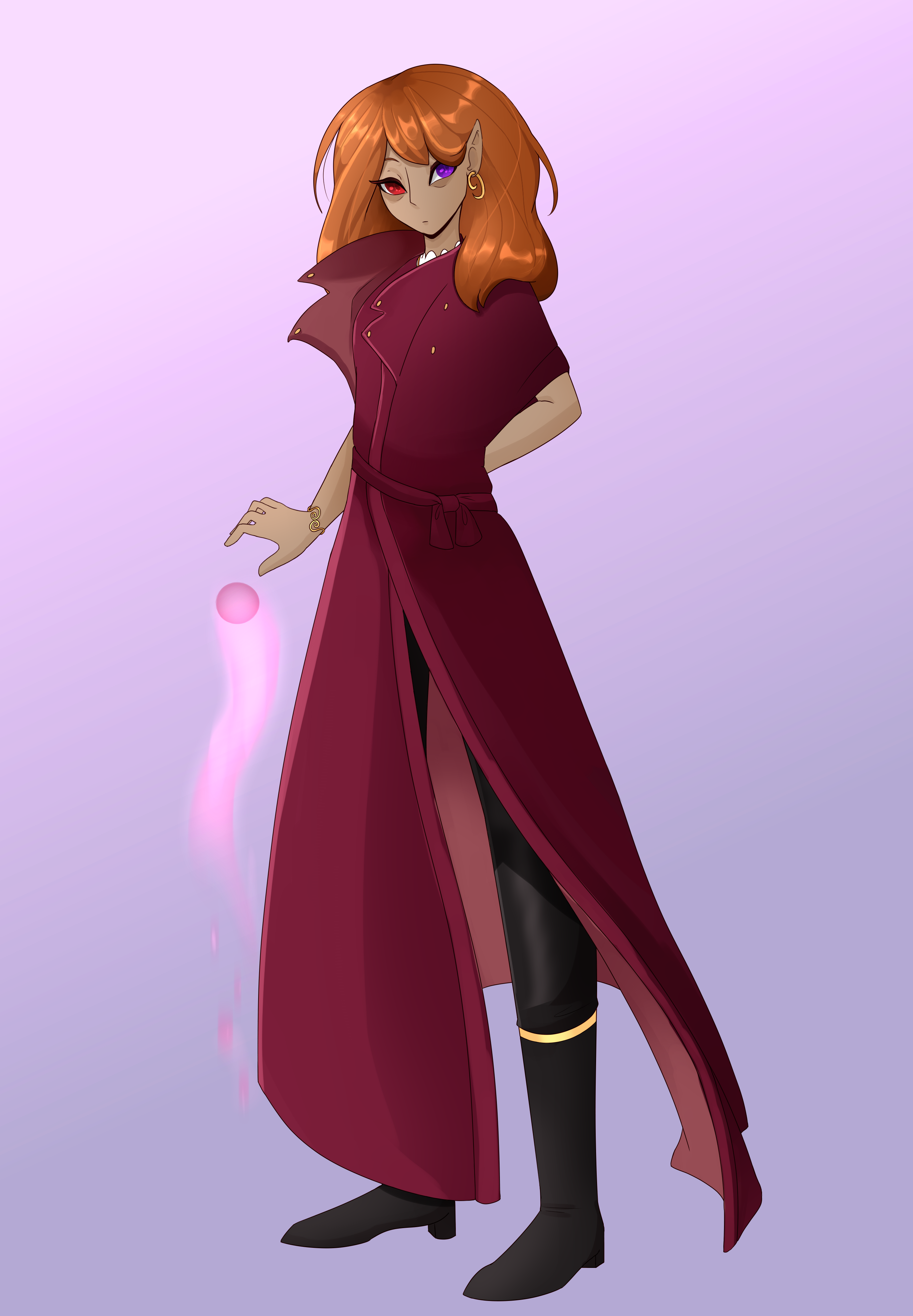 Born before the turn of the millenium, Alani has an ageless air about her that lends her a wisdom unmatched. As a historian, she is intensely interested in the power of stories, especially those previously hidden from the public. As the leader of the Harbinger Society, she is wholly concerned with seeing progress in her nation. She seems racked with a grief unknown, speaks in a meer whisper, and moves with slow deliberation.

Despite her morbid presentation, Alani does have a sense of humor, albeit a dry, dark one. Having been through much herself, she finds it very important to keep everything in perspective. Life is, after all, consistently absurd, and she would be remiss to ignore that. Though, her low chuckle carries throughout the room, and it often creates even more tension when paired with her natural intimidation.

As a young girl, she was always interested in hands-on discovery. When she was old enough, she moved away from her childhood home in Neverra to pursue a magical research path in Ansterre. Years later, her life would take an unexpected turn on an ill-fated solo research outing to investigate an anomaly in the forests south of Neverra. She ventured into a cave system hidden under the rocky forest floor, where she discovered a clan of vampires. The ensuing battle was short.

Her life as a vampire spawn was miserable. For five years, she was without agency, without freedom, having to answer to the tyrannical lord. She became acquainted with some of the other vampire spawn in that time, but her time there was, more than anything, extremely lonely. After years of solitary misery, an unknown adventuring party came and slew the vampire lord, freeing Alani and all of the other spawn. However, instead of being a moment of triumph, she was even more alone than before, undead and wandering. By some miracle, she was able to wander back to her home in Ansterre without suffering other misfortune. She met back up with the Lady Aurora, an old friend whom she knew could help her get her previous life back. Aurora agreed.

The two grew close in the following years, reaching a kind of partnership as they studied, read, worked, and lived together, trying to find a way to get Alani her mortal soul back. The situation became desperate in the twilight years of Aurora's life, when she finally sent a prayer up to her goddess Nara, asking her for a miracle. Nara and Lakia appeared in Alani's dream that night, offering her a sort of second chance, but warning her that they would be unable to fully restore her mortality without killing her first. They took her into their domains, and, in exchange for her promise to serve their broadest goals, brought her partially into the domain of death, pulling her back to life before she could be taken fully. Alani woke to the sun on her skin, warm, but not burning. Her face still gaunt, one eye still glowing red, the marks of long years of undeath still present, but her humanity returned.

Aurora died surrounded by friends, including Alani, her life's work completed far beyond that which others with longer lifespans have accomplished. Alani took over running the History Library after Aurora's death, vowing to herself to keep her friend's legacy secure, well-known, and celebrated. As the world changed in the many decades following, Alani did not age one day. She took quill to page, documenting every social, political, and arcane turn her keen eyes noticed.

When the Neverran War grew past the point of a simple truce, Alani began to notice a peculiar imbalance of power. Many circumstances regarding both the war's inception and its escalation didn't make sense. This observation coalesced into new resolve; Alani had the age, knowledge, position, and connections to gather her own intelligence regarding the secrets of the war. Thus, in 1140, she formed the Harbinger Society, named for the Arcanist of Evocation, her personal underground resistance organization of socially powerful individuals to uncover secrets and rescue innocents. She set up their base of operations in the caves where she had spent so many years as a vampire.

In the years since, the Society has gained a solid, extremely capable cast of members. Alani herself spends much of her time at the Library still, leaving occasionally to oversee Harbinger missions. Her influence and work extends far beyond her, and likely will continue to do so until the day she chooses to die.